This is guest post written by Grant Mitchell, author of TheOTpreneur.com. Grant currently works in Acute Rehab and completed his Master’s thesis on using the Wii as a rehab intervention. We are happy to have him on the My OT Spot blog!

Considering the rising cost of healthcare, consumer technology can often be an effective treatment modality that can double as a home exercise program. An example of consumer technology could include a Nintendo Wii + Sports which can be usually be purchased for less than $50. Given the lack of budget most every practitioner has to deal with, it’s a great opportunity to take advantage of low cost and high tech consumer products for rehabilitation.

Effective implementation of virtual reality (VR) as a treatment modality needs to be practical, accessible, and affordable to the client. The Nintendo Wii and Xbox Kinect are two examples of systems that demonstrate those traits comparatively to the high-end VR products that can cost upwards of $75,000.

Virtual reality can be used in variety of ways across settings. The Xbox Kinect and Nintendo Wii systems have different ways of engaging participants. While the Xbox Kinect doesn’t involve use of a controller, it is played by body motions alone. The Xbox Kinect is easier with a higher functioning population.

Conversely, the Wii system involves the use of a controller and includes games that can be modified to fit a variety of lower functioning populations both cognitively and physically. This article will address Wii use for the general physical disability population. Cognition is a component in the function of clients in the physical disability setting and so will be addressed.

Benefits of Using the Wii in Treatment

One valuable aspect of incorporating this type of technology in therapy is that it is often a familiar technology to the general public. Its accessibility extends outside that of the clinical setting. The common household, including those in the low socioeconomic bracket, might have access to a Nintendo Wii.

Even adults that have not used a Wii before, can often recall family or friends who might have one or use one. Let’s not forget, video games can be fun! Adding fun can be an effective way to make activity purposeful and meaningful.

One benefit of engaging in a therapeutic activity such as the games found on Wii Sports, is the objective based movements so that patients are focused on moving the virtual character rather than thinking about left, right, up, and down. In this way, the client receives instant visual feedback of their performance as they guide the virtual character (Sparkes-Griffin, 2013).

Wii Sports is the most common game as it comes with most Wii consoles. Wii Sports comes with five games: boxing, bowling, tennis, golf, and baseball. The following is short description of the Wii Sports games and how you can incorporate them in treatment.

Boxing: This activity is a great strenuous upper extremity activity. Boxing is a go-to game with the Wii due to the level of endurance it facilitates. This game can be completed with either one upper extremity or can incorporate bilateral upper extremities for a greater coordination demand. This activity is one of the least cognitively demanding, involving a repetitive back and forth (punching) motion with no button pushing.

Bowling: The arm motion of this game is similar to that of the real life sport, however this activity can be done from almost any position. The motion does not stray far from the midline but does involve a two-button press and release component increasing the motor planning demand. This can be hard if hand function is minimal, but good if you want to incorporate fine motor and gross motor planning.

Tennis: This game involves no button pressing during game play, only to start and resume. However, tennis involves the most complex upper extremity arm movements of the 5 Wii sports games. Additionally, with either a computer or an opponent (dual play involves a split-screen and can involve family or friends if available), this game is a higher functioning game requiring the player to motor plan and swing the controller according to the direction of the virtual tennis ball.

Golf & Baseball: These two games are similar in that a minimal swinging motion is the primary physical demand to play. The movement can be accomplished with a good wrist flick, and generally requires a purposeful exaggerated real life swing to get therapeutic benefits. To get significant therapeutic benefit, these activities will often have to be modified to increase the challenge. 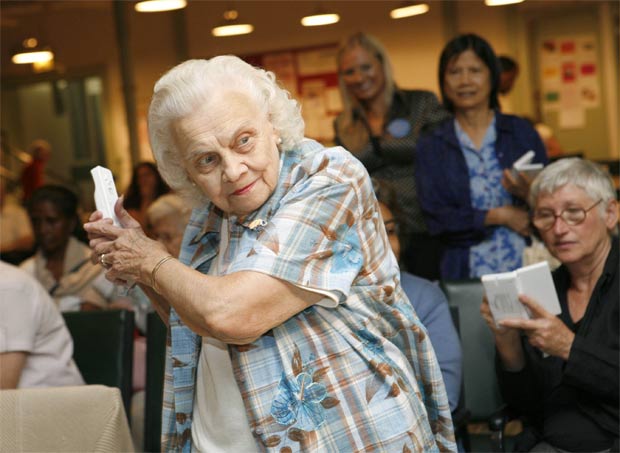 Core Related: The Wii player is moved by the controller; therefore, the actual position of the client can vary. For impaired balance, the therapist can stand behind the client or have a chair available for when the client is fatigued. All games can be completed either standing or sitting. The common high-low mats in rehabilitation gyms provide a great platform for treatment while engaging in the Wii activity. Additionally, clients can participate while sitting on a balance board for a greater challenge.

Upper Extremity Related: Boxing is the only game in Wii sports that can involve both arms with two controllers. However, boxing does allow the option of playing with only one controller. For an added challenge, weights, such as Velcro wrist weights can be utilized to increase the resistance. It is important to note that due to the design of the game system, clients can “cheat” in terms of movement, meaning using little ROM and compensating arm movements with wrist movements. If you as the therapist want good movement, you may have to cue it as little feedback is provided by the Wii.

As a thesis project to complete the requirements of graduating with a Master’s in Occupational Therapy, my classmate Kyle Nelson and I (Grant Mitchell) collected literature surrounding the Wii and Xbox use in rehabilitation.

Our poster has been accepted for display at this coming year’s 2017 AOTA conference. This information is in the process of being made available as a free resource on an independent website. Until then, the Prezi presentation of the initial poster can be viewed describing this thesis project.


For additional questions, please don’t hesitate to email me at [email protected].

Prezi Presentation: Use of VR in Rehab 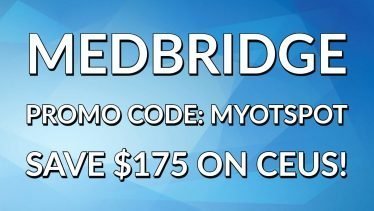 Use MedBridge Promo Code MYOTSPOT to Save $175 on Unlimited CEUs! 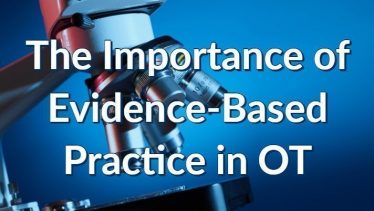 The Importance of Evidence-Based Practice in Occupational Therapy 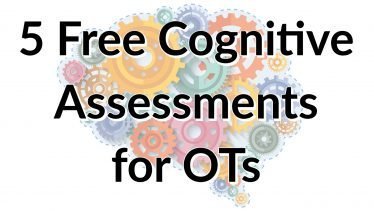 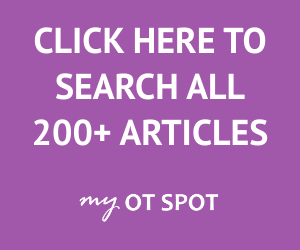